The 23 and 24 of June hold a special meaning for Scotland and England as the two countries commemorate one of the longest battles of Medieval times: the battle of Bannockburn. This battle marked a brief period of independence under the rule of King Robert Bruce, a much coveted time of relative peace in the tumultuous campaigns of Scottish independence.

Since historical events never happen in isolation, the best way to revisit the Battle of Bannockburn is starting with the campaigns that preceded the victorious clash.

Around the world, most people will remember the name William Wallace - represented inaccurately by Aussie Mel Gibson - and associate it with the campaign for Scotland's independence. While Wallace did set the background for the success at Bannockburn, he died a gruesome death before seeing Scotland achieve this victory.

During Wallace's time, England and Scotland faced each other in the battlefield several times. England wanted to invade and control Scotland, while Scotland fought to remain independent. Things were looking up for England at first, having won the Battle of Dunbar in 1296, and at the Capture of Berwick in 1296. The Scots, despite their fewer numbers and less equipped men, were victorious at the Battle of Stirling Bridge in 1297.

It was a brilliant and opportunistic victory, with William Wallace and Andrew Moray leading Scotland in a less than chivalrous encounter against England. Funnelled down Stirling Bridge, the English army quickly became sitting ducks as the Scottish forces waited in the other side to slaughter them. The Scots were also helped by what could have been seen as providence: the Stirling bridge collapsed under the weight of the armies, drowning many an English soldier. The spirits were high in Scotland, but the country would suffer a whiplash that would end in Wallace's death.

Edward I didn't take lightly the English defeat in Stirling, and with the support of Welsh longbow-men claimed victory for his country at the Battle of Falkirk in 1298. Defeated, Wallace handed over the power to the future king, Robert the Bruce, and to John III Comyn. It was in 1305 that William Wallace was captured and met his gruesome fate. And when we say gruesome, we mean it: he was hanged, drawn by horses, emasculated, disembowelled, beheaded and chopped into four pieces in the traditional torment reserved for traitors. 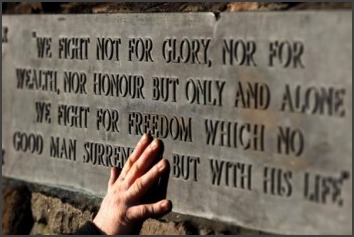 With Wallace gone, it was up to Robert Bruce to reclaim independence for Scotland, using the tried method of guerilla warfare and territorial advantage. Small victories against England cemented Robert Bruce's leadership and the credibility as head of the Scottish armed forces, formal or otherwise.

By then, Edward I had died, and Edward II took his place on the throne of England. He wasn't the warrior and strategist that his father had been, and this became an advantage for the Scottish forces. He fought and lost several encounters against Bruce, and was only able to hold onto a fortress in Berwick and one in Stirling. It wasn't looking good for Edward II and his army, who suffered due to his lack of assertive military tactics and the constant disputes within his senior command.

Amidst this inner turmoil, the English forces moved forward to meet Bruce's army in a woodland near Torwood. Where exactly, it's hard to tell. Bannockburn is one of the most disputed battlefields, with at least 5 alternative locations in which historians assure the battle actually happened.

Numbers are hazy at best, but it is clear that the battle for Scotland's independence was a David and Goliath story, with less than 10,000 Scots facing more than 16,000 English soldiers. Cavalry, infantry and knights against foot soldiers and a handful of horsemen, it became a war of wits versus power, and terrain advantages versus military training.

A trustworthy source of battle knowledge, The Complete Guide to the Battlefields of Britain by David Smurthwaite, states that the armies that clashed on the battlefield may have looked like this: on the English side, there were up to 18,000 men, which included 1000 to 2000 in heavy cavalry. On the Scottish side, Smurthwaite suggests there were probably around 6000 men plus some 3000 poorly trained and equipped local forces and up to 500 of light cavalry. During the first day of battle, Scotland showed England loud and clear that they had learned from previous defeats. The heavy English cavalry and knights needed to traverse main roads, while the light Scottish forces could fight in the woods or the marshes, a definite advantage for them. To lure the English into their trap, the Scottish forces pretended to flee into the woods and hoped to be followed by their enemy. It worked.

Those who feel for animals should avert their eyes now, because Bruce's forces devoted their first efforts to bring down the cavalry with traps, pikes and ditches designed to kill the animals that gave his enemies an advantage. During the first day of battle, the Scots demoralized the English forces with "hit and run" tactics that threw the invaders into confusion.

When the second day of battle started, the English started on foot and left the cavalry behind. Bows and lances came first and were met by the Scottish forces, including their light cavalry, though some historians suggest that the Scots were all dismounted. But England wasn't exclusively fighting Scotland at the moment. The conflict inside their infantry and the weak command chain was at least partly to blame for the defeat that came by the end of the day. The English King fled, and the remaining of the army died in pits, drowned in marshes or barely escaped their lethal fate. Scotland was independent again, and the English army had ceased to exist.

Now, 700 years later, the anniversary of the Battle of Bannockburn will acquire a political tint as a referendum to vote for Scotland's independence is held on the memorable date. The Yes or No that Scottish citizens will cross on a ballot on 18 September will be certainly charged with historical memories and anti-English sentiments, according to Sir John Major, partly stemmed of the battle of Bannockburn. It may or may not be deliberate that, as speculated by several No voters, the referendum will be held the same year of the 700 anniversary. Will Scotland be independent again? Time will very soon tell.